This NPR story describes a buzz level approaching ubiquitous love for libraries.  I'd be all right with that!
Posted by Libraralan at 4:54 AM No comments:

The article I wrote about my library's quarterly readers' party just appeared online.  American Libraries did a bang up job.  Should be in the August issue, on page 29.  But you can read it here beforehand.
Posted by Libraralan at 9:04 AM No comments:

As a presenter in my first-ever out of town conference, I may have been more receptive.  But this is the most productive conference I have ever attended.  I met tons of interesting people (from shaking hands with authors to chatting with amazing colleagues in line), lucked out in that most presentations were useful and entertaining, saw some great folks (like Storycorps) on the exhibits floor, and I feel like I walk away a better librarian with plenty of ideas to share and implement.

I put these here so I can access them, but more so I can share them with others.  Notes from all sessions can be found on posts throughout the following entries on this blog.

The first session I attended was Nancy Pearl interviewing Mary McDonagh Murphy about To Kill a Mockingbird’s anniversary and Murphy’s amazing-looking documentary, specifically.

Then I learned about cloud computing and open access.

I then sat in on the YALSA Great Graphic Novels for Teens roundtable. I walked 6 blocks in the 100 degree heat index to see this, was the only spectator there, and learned a lot, both about graphic novels for the collection and about how roundtables function.

Ended the day by seeing some old friends, one of which treated me to a tour of her place of employment, NPR. Absolute thrill of thrills.

That was Saturday. Here’s Sunday:
I began the day with a typical Stephen Abram lecture. In other words, my mind was blown wide open with the possibilities as well as the things we should stop doing. Brilliant lecture.

Then I headed over to the panel I was fortunate enough to be part of: Innovative Collection Centered Programs: Beyond the Book Group which I think I did all right in, with my presentation on Oak Park Readers. But my colleagues on the panel were just amazing.

After that, I was interviewed by a German doctoral candidate and another professor of LIS about my American Libraries article, "Those Who Can, Do. Those Who Can Do More, Volunteer." She was very complimentary. And I’ve learned: this article has legs (another doctor of library science bought me drinks, wondering if I'd be on a panel for NEXT year's ALA.)  Flattering and exciting.

Sadly, this made me miss Will Shortz.

But I was able to sidle over to Are You a Programming Librarian? Which was an inspiring plug for yet another great collective of librarians: programminglibrarian.org

I got to see Roy Blount, Jr. talk about his Duck Soup making-of book Hail Hail Euphoria. Very amusing, enlightening, and I will read this tale about a film whose creation not many know anything about. Love them Marx Bros!

Then I haunted the amazing exhibits floor again (and again) and visited the bookmobiles, which though parked by the dumpster were very eye-opening, inspiring, entirely different from one antother with each library's personality shining through, and just plaincool to see.

Monday:
I have read in various places (such as this) that graphic novels are really getting their due.  And at ALA, this is true.  There was practically an entire track devoted to them.  And on the exhibits floor, Art Spiegelman, Francoise Mouly, and Geoffrey Hayes all sat at a table waiting to talk to fans; great, down-to-earth folks whose hands I still can't believe I shook.  Great Graphic Novels for Teens was a conversation happening over at something called the Pop-Top pavillion.  Most of this stuff was covered at the roundtable I invaded Saturday afternoon.

Then I saw Salman Rushdie for just a few minutes. Presence of greatness and all that...he related a tale in his dulcet British tones that someone hipped him to the fact post-publication of his infamous book that Lord Byron referred to his contemporary poet laureate’s poetry as The Satanic Verses. This was a happy accident, as was my being able to grab a few moments and walk into this presentation. 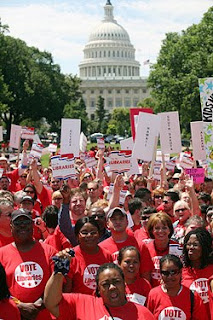 In bright red t-shirts, librarians stormed Capitol Hill to rally and demand more funding for libraries.
Lauren Myracle delivered an inspiring address to the gathered throng.  Similarly, Vernon Ehlers represented Michigan and Jack Reed Rhode Island.  See photos and watch a lengthy video here.  Apparently it was the largest rally of its kind ever held.  As the fellow with the youngest rallier on his shoulders (Ruby is 13 months), I can say it was fun.  As a librarian, I can say it was truly moving and inspiring.

I put these notes here so I can access them, but more so I can share them with others. Notes from all of the sessions I attended can be found on posts throughout the following entries in the blog.
Posted by Libraralan at 3:21 PM No comments:

As I anticipated, this was an amazing program and one I would have attended, even if I wasn't on the panel.  My notes aren't the greatest, since I was busy being nervous most of the time.  In lieu of decent notes, an outline of my fine colleagues' programs can be found here.  What follows is what little I was able to scribble about them while still looking like a calm, discrete panelist...


First
Trivia Night using library resources, presented by Vivienne Beckett, Scenic Regional Library, Union, MO.
A very cool program where Vivienne and her staff use actual library sources to drum up questions in this "pub quiz" style trivia night.  Exceedingly popular and very similar to one that my library runs, otherwise there would be more notes here.
Second
Winter Reading Club; Book Bingo; Book Club Mixer, presented by Michelle Boisvenue-Fox, Kent District Library, Grand Rapids, MI.
Winter Reading Club
2700 registrants.  Bingo card has 16 titles (originally more), inspiring patrons to read beyond "comfort genres."
Sticks slips in hold books.
Adult SRP
250 entrants/190 finished.  Treasure hunts.
Bingo & Booktalks
Patrons don't need to read a book.  Can sell new ones here.  The game brings them in.
Book Club Mixer
Discover great titles for book groups.  A circuit of tables fills the room: tables for: gentle reads, great books for book groups, local author, etc.
Each patron's name badge lists the best book they read in the last year.  Many brought lists of recent reads.
A booklist was necessary for those that can't attend.
Third
Twilight Comparative Lit Camp.  Available for college credit, group reads and discusses the Twilight series, Pride and Prejudice, Romeo & Juliet, and Wuthering Heights, presnted by
Cynthia Dudenhoffer, Smiley Memorial Library, Central Methodist University, Fayette, MO.
Blurring the line between public and academic, local PL is only open 3 days/week.
Twilight is a natural--so popular, it has its own barbies.  13 to 50's love the book.
Course
Literary analysis
Themes & ideas -- Is Bella a good role model?
Slumber party atmosphere run by a 23 year old chaperon/fan.
Tie them into classics.
Moms wanted to be part of it; added a day for them.
Activities
Create a thematic soundtrack to the book
Crafts: shrinkydinks, cupcakes, etc.
Cast different stars/each other for the movies.
Boys are next: Hunger Games?
Fourth
Oak Park Readers, an informal book discussion group where patrons can just drop in to chat about books in a social atmosphere, with no formal title selection, by
Alan Jacobson, Oak Park Public Library, Oak Park IL.
More information on Oak Park Readers can be found at http://www.oppl.org/opr
Fifth
Thrilling Tales:  Storytime for Adults.  A monthly lunchtime program where Wright and staff read short stories aloud, by
David Wright, Seattle Public Library, Seattle WA.
Twice a month, lunchtime program attracts 40-100 people.  Seniors, workers, mothers, tourists.
Story is what we do.  Storytime is pure & elemental.
How to...
Photocopy strories, lay out the season.  October will be scary, Feb romantic, etc.
Read it, reread it, time it, mark it up (different colors for each character)
When performing, add no commentary.  Use a microphone.  Light at the podium, dark otherwise.
Call it a "grown-up" storytime.  Not an "adult" storytime.  Avoid xxx connotations!
Podcast it, tie it to local NPR station.  Use public domain stories.  Or don't worry, fair use seems to win the day as authors have told David they love being read.
Twilight Zones, Alfred Hitchcock Presents are the types of stories that are very successful, genre stories with a twist work best.
If you don't want to read the stories, tap your local theater troupe.  Can have a small repertory group.
Guest readers, such as Nancy Pearl, have asked to perform.
Possibilities
Combined storytime and discussion called "The World's Easiest Book Group."
"Stories through History" where music, facts from the year the story was told are shared.
"Stories Around the World," 80 stories from 80 countries.
Vampires, family, ESL/Bilingual.
Do as annual festival--one community/one book.
Short story + film made from it.
Posted by Libraralan at 5:03 AM No comments:

Uninvited, but not unwelcome, I sat in on this meeting where the 2011 nominations were discussed. Score! I walked away with their list of nominations.  I was the only spectator.

Each of 29 books was discussed and commented upon; all had cards on whether to comment, vote yes or no, and “spoiler ahead.” Passionate discussion ensued. Each nominee discussed his or her nomination, a vote was tallied, and then it was decided whether the book made the list, did not, or was tabled for midwinter. This was called a “Straw Poll.”

Appeal (who the book was for) was considered over literary quality. For example, Amelia Earhart: This Broad Ocean was considered for reluctant readers but also thought to be too young for the list, even though the panel unanimously liked the book.
Uniqueness also seemed to be a factor.

Even when a nominee’s chosen book was lambasted, there was good, mature discussion; no hard feelings.

I walk away with a reading list: Chew, Calamity Jack, etc.

This is a panel I would join.
Posted by Libraralan at 2:47 PM No comments: